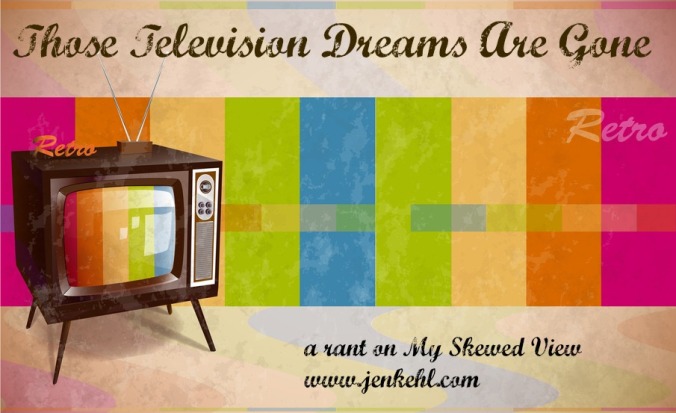 I freaked out the boy tonight by announcing we were only going to listen to music now.

The TV is making me crazy. It really is.

I was a staunch no TV mama until he was 2 and a half. Then he got pneumonia for the first time and there was only so much entertaining I could do.

Once Pandora’s box had been opened, it was very hard to shut. So after that it, was some – not much television and really benign stuff at that.

Over the past year I’ve let more in. It started innocently enough, Magic School Bus, Duck Tales, Rescue Rangers. But then it got a little more intense: Transformers, (new) Garfield and The New Woody Woodpecker.

Notice something there? Every 5-10 years there seems to be a changing of the guard, make it new more intense, the colors are more vibrant, the action is more close-up – in your face. Even sexier.

Everything moves faster, the characters are more belligerent. Some are downright mean; yet they are the heroes.

I’ll admit it, I’m old-fashioned. I have high expectations of my child and his behavior. I am also really concerned about what I am feeding his brain.

The boy doesn’t even know we have “television” all he knows is Netflix, Amazon Prime, YouTube and videos (yes VHS too) – he is spoon fed what I deem to be harmless. But it isn’t completely, it never is.

Yes. I blame television for most of the attention problems, behavior problems, bullying problems, disrespect problems.

When we were kids (for me I mean 70’s and 80’s) Everything was slower, less intense, shows accessible to kids were innocent yet truly taught positive messages.

From The Brady Bunch to The Cosby Show. Benson, Full House, Different Strokes.

Even the racy shows: Three’s Company, Love Boat, Happy Days and The Dukes of Hazzard were tame compared to today’s standards.

Really?  These shows are supposed to replace the solid family shows we were raised on?

Over the past 40 years there has been an insidious nature infiltrating our television shows. Why I wonder? Why was it necessary? What changed first? I don’t understand and it’s my generation creating the programming for the most part. What set this in motion? Was it the new technology? Was it the angst of Generation X? This dystopian reality? Nihilism run amuck?

Where is Dr Huxtable? Where is the adult with integrity? Where is the parental figure who catches you doing something wrong, and teaches you something – while simultaneously making sure there are fitting consequences for our actions?

How are we to be effective parents when every where our children look, the images they see are of incompetent parents, idiotic authority figures, bumbling police men?

What are we teaching them? They certainly have no reason to listen to their parents. They’ve seen “parents” on Modern Family and The Middle, all they do is make a ton of mistakes that totally screw up their lives and the kids are always smarter than those clueless parents. And no matter the trouble the addled parents find themselves in, there are little or no consequences as the whole affair wraps itself up neatly in 30 minutes.

What about the children on these shows? They don’t listen to their parents and go out anyway, they “borrow” the car, they scoff at authority, make teachers look like idiots and suffer no consequences or at the most very minor ones. And talking back to their parents? Well that’s just the way they talk!

When a kid bumps right into me in the mall instead of moving aside, or let’s a door close on me as I walk behind him instead of holding it. When he acts rudely to the people working behind the counter at Aunt Annie’s like they don’t exist – no please? No thank you? Am I surprised? No.

I know this article is gonna piss a lot of people off. Hey I know a really large portion of my close friends disagree with me.

Personally, I think they disagree out of convenience, denial is a beautiful place to live. I would join you there. If I could.

Use my son, Isaiah (8), as a control. No television until he was 2.5 years old. Diagnosed with Sensory Processing Disorder before then, so I can’t say television caused it. Until 4 or 5 he only watched hand-picked movies. Then I sprinkled in some carefully vetted shows.

But over the past few years I have felt guilty, worried I was stealing his childhood, I wanted to allow him to enjoy television like I did. It was never my intention to create one of those “I never had a television growing up” kids.

The problem is, I quickly realized that in an era of Sponge Bob and Phineus and Ferb, I was not going to find what I felt was equivalent to my television experiences. And so we watched The Andy Griffith Show, Leave it to Beaver and The Brady Bunch. When we needed cartoons it was old Looney Toons, Pink Panther and early Chip n’ Dale.

And like the proverbial frog slowly dying in a pot of ever heating toasty warm water, I start to think; he’s okay, he’s doing fine, let’s let him watch some of those shows that are geared towards his age! Yes! Let him have the same experience as all of those other crazy kids! Lets watch the high-speed fast paced world of cartoons created in the last 14 years. Maybe even throw in some shows on Discovery (via Netflix) that he might even find fascinating.

And then it began to happen. Something I had seen before when I tried similar experiments. The behavior. The aggression, towards me, towards the dog. Talking back (more than normal), arguing about every little thing, refusal to do things for himself (like get a glass of water or help around the house) and perhaps most of all, and the basis for my strongly worded hypothesis, a marked increase in his tic.

Isaiah has a tic disorder that began at age 4. It has come and gone, but since allowing television as more of a regular event for the last few years I would say the tic is around more than it is not. I should start calling the tic disorder the I have been watching too much crazy TV barometer.

When Isaiah has been watching any of the more, let’s call it visually stimulating or respect deficient, programs his tic increases in a very noticeable way. He notices it too, but when I say “why don’t you give your brain a break” he insists he doesn’t care.

So, what is the answer?

I don’t seem to be able to find a happy medium. Truth be told, I don’t believe there is one.

I cannot recreate what I grew up with. A line up of shows that were both entertaining to adults and children a like. In the 70’s and 80’s, primetime didn’t go totally adult until the last hour when it was assumed kids were in bed. You could be sure the first 4 shows were going to be safe for your 8yo. Have you even thought about how much sex there is in the shows during the first hour of primetime now? Which here in the midwest is from 7-8, of course your kids are awake!

So while I attempt to spoon feed my child, he is still drawn to things I don’t even realize he’s aware of. Ninjago is the new thing. It has strong language, violence, belligerence, all the things I want to keep him from. But it’s Legos so how can it be wrong he wants to know.

I leave you without an answer. For this is my lament. I will be the best parent I can. I will do the best I can to filter. But I will blame Hollywood for the creation of a generation of obnoxious, consequence free, disrespectful, attention deficient* children, and I am nervous for the future.

If parents don’t make the decision to be better filters for their children, Hollywood will continue to lower the standards until we are all frog legs on some French dude’s plate.

*I do not believe all ADD is caused by television, however I do believe television can cause it in the sense that if a teacher can’t move as fast as a television show or a video game than how can he be as interesting to a kid as what the child sees on the screen?

18 thoughts on “I Blame Television”