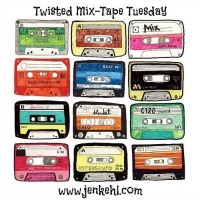 I never needed spiritual songs more than I have this week. A week ago the server on which I am hosted was under attack by a malicious hacker. SO FUN!!! My site was acting funny, then shut down all together on Wednesday. After the attack was over, my site was never the same. Long story short – there will be a why I hate hostmonster, bluehost, host gator post in the near future.

In order to fix the problem we (me and godaddy) actually had to move my site to a temporary URL until Hostmonster releases my domain, which they are taking their sweet time doing.

So here we are. I am holding my breath, hoping they won’t switch it off in the middle of our Party, but it seems pretty likely that it will happen. Cause that’s my luck this week.

Give Me Strength to Weather This Storm

There’s Hope by India.Arie – Right about now this could be the only song on my list. This song always reminds me that what is happening in my life DOESN’T MATTER. This is nothing but a blip in the radar of the big picture.

Rock me on the Water by Jackson Browne – This is a song about having hope, and yet there is that metaphor of the sea…

Live High by Jason Mraz – I’m not going to get into a philosophical discussion about what I think this song is about, but I will say this; this song reminds me that the picture is so much bigger than we know. And that spending one moment wasting time on bad or wrong thinking is a waste of time. We are not alone.

Southern Cross by Crosby Stills and Nash – Second verse, same as the first. Think about how many times I have fallen, Spirits are using me larger voices callin’, What Heaven brought you and me cannot be forgotten….

In Your Eyes by Peter Gabriel – You may not be aware of what this song means as you sing your heart out to it, sometimes it’s easier to sing the lyrics and not pay close attention, but coming to my faith late in life – this song has been a personal anthem for me.

Brother Love’s Travelling Salvation Show – Neil Diamond AND BONUS Johnny Cash!!!!! It’s easy for people to make fun of Neil Diamond, WHAT?! No way, this guy really is an amazing musician. But he is more than that… and if you ever had any questions about what this song means, and what Neil Diamond thinks, listen to this and you won’t wonder anymore. I’ll tell you what, when I’m troubled I’ll reach out my two hands…

Would you believe that writing this post has made me feel so much better? Sometimes you need a reminder of how small your troubles really are. A reminder that you are not alone, in your life or your world. These songs remind me of that, and today, I needed to be reminded.

Thank you for listening, now share your MixTape with all of us. The best part of this party is we get to hear so much music that may be new, may be forgotten or may be just what you wanted to hear right now.

These are the rules. Five songs (give or take). Stick to the theme (as best you can). Check out the other players (everyone wants to share their tunes with you). Create a mix, not a “hey look at all the cool songs I know” we’re not snobs, if you were our best bud and you were gonna make us a tape, what would it be? And share this party so more people will play next week!

Do me a favor, if you’re a veteran, try and visit at least one person you’ve never visited before.

October 29 – Songs that are scary. FOR ANY REASON. Halloween is a few days away. Are they scary because of the words, what the band looks like, because it’s just so darn bad??
November 5- Free for all!
November 12 – Song’s that tell a story. These can be epics or not. Just a story. You know, just not la la la I love you or I hate you or whatever….
November 19 – Cheating Songs
November 26 – I know it’s gonna be hard, with Thanksgiving and all, but this is a really fun topic suggested by my favorite mixer-uper, literally, she’s always mixing up the topic. Kerri from Undiagnosed but Okay. She said,  how about a “this song could’ve sent me to jail?” I was intrigued, but needed more. Hmmm let’s see the Doors come on baby get higher 🙂 Or Carrie Underwood doing a little grand larceny beating up her boyfriends truck? Blondie gets arrested after seeing Aliens in Rapture Or even to be funnier: Joe Cocker you can leave your hat on, so if I left just my hat on I would be arrested for indecent exposure. Trust me it wouldn’t be pretty! – Now I get it!
December 3 – It is officially OK to be listening to Christmas Music now! Bring it on! Maybe we’ll find some new favorite Christmas tunes for our holiday playlists!