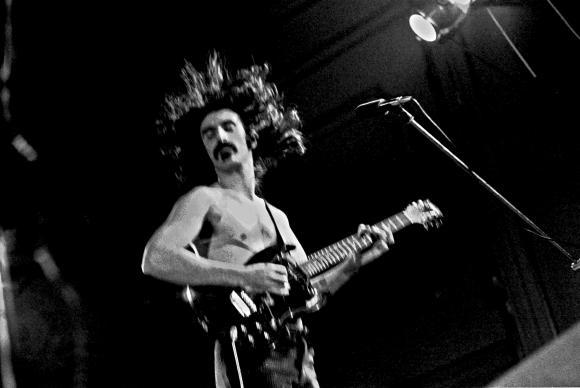 You may not know who Frank Zappa is, chances are if you’re under 40 you don’t. Maybe you do, but are wondering why you should care about this total freak show who created vulgar über wacko performance art concerts before that was cool?

I can’t possibly tell you everything you should know about him. I can tell you this. Back in the olden days, I was creating one of my mix tapes for twisted mix tape, I was trying to narrow down some ideas on who I would include in a 70s mix.  Everyone came back to Frank Zappa. Little Feat – they met while playing with Frank Zappa.  It seemed like everyone who was anyone was tied to Frank Zappa. You know the song Smoke on The Water? Well it’s about an accident Frank Zappa had at a concert:

We all came out to Montreux,
On the Lake Geneva shoreline.
To make records with a mobile,
We didn’t have much time.
But Frank Zappa and the Mothers,
Were at the best place around,
But some stupid with a flair gun,
Burned the place to the ground.
Smoke on the water and fire in the sky.
Smoke on the water…

So Deep Purple was there, at the Montreux Casino in Switzerland, when some crazy Zappa fan shot off a flare gun that caused the whole Casino to burn down. And you didn’t even realize that without Frank Zappa you wouldn’t even be able to jam to Smoke on the Water.

Frank had a gift for identifying and attracting amazingly talented musicians. Did you know you might never have heard of Missing Persons, Talking Heads, King Crimson,The Doors, Berlin, Steely Dan if it wasn’t for Frank Zappa?

Maybe you’re more of an 80’s fan? Did you know it was one of his discoveries that wrote and produced this little number to win an Academy Award?

This band? No Frank Zappa – no Grand Funk Railroad

What’s that you said? Sting and Frank respected each other so much that Sting decided to join Frank on stage in Chicago and let them Zappaize Murder by Numbers?

Right, and some guy named John Lennon decided to hang out on stage with Frank and his band.

And you know Frank had some great advice, Don’t Eat the Yellow Snow

And then there are the musicians who played in bands you know so well, or who supported the amazing vocalists of our time!

His brother Randy Brecker  – trumpet -Played with George Benson, Blood Sweat and Tears, Gato Barbieri, Lou Reed, and many jazz musicians you would recognize if you heard!

Steve Vai who was a crucial member of David Lee Roth,Whitesnake, and Meat Loaf

Tom Malone was the trombone player for The Blues Brothers.

Jean Luc-Ponty Violin, if you don’t know him you need to.

And who couldn’t wait to be a part of Frank Zappa’s next project?

John Lennon – guessing you know who that is and his wife Yoko.

Give Frank a try, he left an amazing legacy behind. He was crazy, wild, amazingly talented, free thinking, and innovative. Everyone wanted to know him, the musicians of his time wanted to play with him, and he was just as happy to have everyone around.

In my darkest days, Frank Zappa songs can lift my spirits…

Why Does it Hurt When I Pee?

Montana (If you ever hear me say I’m going to be a Dental Floss Tycoon, now you’ll know why)

Oh right! And I love this one too! Cosmik Debris (I chose the studio version, his live stuff is fantastic and a must see, but if you want to hear the amazing musicians and production, well we go to the studio folks)

I know, I can’t count. How about you? Do you have a favorite Frank Zappa song or story? Or maybe an origin story about another band? I’d love to hear!

OMG I love love love your new site design. I’ve been thinking of doing something like having a home page too. Hm. Also ZAPPAAAAAAA! And TMTT!!

I love me some Zappa. Was just talking about him the other day. Gonna go listen to Joe’s Garage now. 🙂