Is there a band more recognizable than The Beatles?

When searching for the Best Rock Band of All-Time the answer was unanimous. But search for the answer to this question, “Who is the fifth Beatle?” and amazingly you will not find the real answer.

On June 3, 1964 the fate of a successful, but small-time drummer would change forever. Jimmie Nicol would become the fifth Beatle, if only for 13 days, and it would change the trajectory of his life in a way no one could have predicted.

This is a story that clearly would have never been told if not for the painstaking research done by Jim Berkenstadt. He took what was barely enough material to write an article and meticulously followed the movements of this mysterious person who replaced Ringo Starr for the Beatles first World Tour for 13 days.  The Beatle Who Vanished is a fascinating look inside the history of rock and roll in London, and the music industry’s attempt to create pop stars by controlling and molding the musicians who were discovering and exploring this rapidly changing music scene.

Jimmie Nicol’s life was intricately intertwined with the birth of Rock and Roll. As Berkenstadt uncovered Nicol’s history, he discovered a drummer so well regarded that, in 1964, his destiny was most surely on the path for fame. No one denied that Nicol’s skills were among the top in the clubs and music studios of London, he was well-known for his versatility; moving between jazz and rock easily and even combining the two. Often asked to play with many up and coming bands he was making a decent living as a musician and had become a staple as a session drummer, he was also the drummer for a series called Top Six, a weekly recording if the Top Six hits, often covering Beatles songs to perfection, who could know how important that would be?

Just when it seemed Jimmie’s ship had come in – because he had become the permanent drummer for Georgie Fame and The Blue Flames, he and his wife were living a comfortable life, and he was guaranteed work at something he loved; his life would take one more turn. Paul McCartney would personally call Georgie Fame and ask if they could “borrow” his drummer Nicols.

The rest they say, is history. But it wasn’t, not for us, not for him. It is what happened after this amazing story that was a mystery for so many years. Jimmie was a tried and true Beatle for 13 days, it may not seem like a long time, but as you read about the intensity of the touring, traveling and riot like interaction with fans, one can see how it felt like a lifetime for Jimmie. Jimmie joined the Beatles as the crescendo of Beatlemania was beginning, he was ill-equipped to be at the center of such fame and adulation, Paul McCartney befriended Jimmie and often asked him if “It was getting better?” Jimmie’s response? “It’s getting better all the time.” 13 days of playing multiple shows a day, their songs felt like his songs, and just as he began to feel like a “real” Beatle, it was ripped away from him. 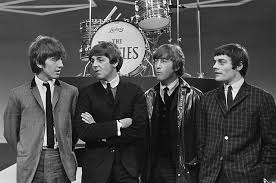 Jimmie is on the far right. Picture credit wikimedia commons

Even for those who new Jimmie well, no one could understand that feeling. He went from being a Beatle to being plain old Jimmie in one day. His attempt at recreating that fame, his subsequent travels and his disappearance and supposed death are the riveting plots of this wonderful mystery of a biography. Jim Berkenstadt does something for Jimmie that he could never do, he showcases his amazing talent and paints a picture so clear that when you finish this book you will feel like you knew Jimmie all along.

4 thoughts on “The Beatle Who Vanished”