The Rocky Horror Picture Show Was My Gateway Drug – Of Sorts

I was a little like Janet and Brad in 1985, alternative music was for other kids: The city kids, the kids in Chicago, not for suburban kids like me.  Chicago kids went to clubs and live shows, what did we do? We went to parties and crossed our fingers the cops wouldn’t show up. Maybe we drank, maybe we smoked cigarettes, but we definitely listened to Top 40 while we did it. INXS and Duran Duran were about as alternative as we got.

Little did I know my life would soon change forever: I went to a theater camp every summer of my life and there had met some of my closest friends, one of them was a guy from Evanston. At that time, Evanston was a big deal – Evanston was Chicago’s wealthier, prettier, safer little sister. But it was almost the city. Since some of us were driving and some were on the cusp, we got to hang out with these friends that were, for all intents and purposes, city kids. As it happens, they were as good as city kids when it came to music. 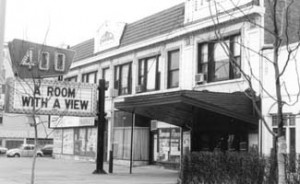 There was this old theater on the border of Chicago and Evanston, called The 400. It played The Rocky Horror Picture Show every night at midnight. The cool kids, the almost city kids, had been. More than once. Me and my friends, had never been.

Let’s face it, they weren’t actually playing that stuff on pop radio in the early 80’s. The only way I was going to hear it was by being ushered into that cultural phenomena by those more urban than I.

Admittedly I was on the verge then. On the verge of being musically curious and then diverse and then just plain old blenderized.

Rocky Horror paved the way for The Cure, Ministry, Dead or Alive and Shriekback. I mean let’s face it, they all kind of looked a like.

The amazing thing about this movie is that it was a true cult film. Tim Curry was absolutely mesmerizing in his first movie role ever. His brilliant acting and perfect voice set the tone for a film that would take a little understanding before making it big.

It tanked in the box office when it opened in the UK in 1974, and even had its original debut in New York cancelled. Then, they were further downgraded by being scheduled on a very small-scale to do double features on college campuses with some cult classics of the 50’s and 60’s – this also tanked. Eventually someone got the genius idea to screen the movie on Midnight of April Fools Day in 1976. Apparently that was the magic potion. By that Halloween people were showing up at Rocky Horror in costume and talking back to the movie screen. Within the next two years it was playing at Midnight Movies in over 50 locations, with fan clubs and newsletters sent out to their cult following. By 1979 it was playing in 230 theaters.

The Rocky Horror Picture Show is considered the longest running release in movie history, it is still playing the original version from 1974.

And a shout out to those two Evanston boys that made it all possible for me, believe it or not, they are both in the music biz today. They were the first ever human beatbox I got to hang with and they turned me on to De La Soul. What more could a girl want?

View all posts by Jen Kehl