Yea! Today is a great day. A bunch of my blogging mama friends and I have decided to regale you with some of the unexpected stories of extreme parenting. We were all chatting about the bizarre, scary, amazing and sometimes just plain crazy things that we have experienced since becoming parents. No one ever wrote a new parenting book about getting punched in the face by your kid, catching vomit in your hands or pyromaniacal tendencies. So we decided we’d collectively share our stories with all of you. We each contributed a paragraph about our own experiences in parenting, be prepared to laugh, to cringe and to feel thankful it hasn’t happened to you! We’d love to hear your experiences so chime on in!

First off the adventures of parenting my future demolitions expert:

Jen of My Skewed View

All I ever wanted when I grew up was to be a mom. Don’t get me wrong I am not the soccer mom/room mother/girl scout leader type of mom. I wanted to be the mom from That 70’s Show (well my life was that 70’s show and I wanted to be my best friend’s mom), you know where everyone hung out, got fed and I would be joyfully oblivious. What I didn’t realize was there was going to be a life between 0-16. And although I’m pretty sure that my son will be the guy whose house you want to hang at; I never thought of the type of personality it would take to be the guy everyone wants to be around. Yeah, no one ever warned me about the things the cool kid might do, like this:

Motherhood is not at all what I thought it would be, and frankly I was completely unprepared to raise a boy. But now that I’ve settled in, I’ve gotta say that it’s pretty awesome and I wouldn’t have it any other way.

Stephanie from Mommy, for Real

A friend of mine told me last week about an unsavory incident she experienced during a game of peekaboo with her toddler. While my friend obediently covered her eyes, her two-year-old daughter put her tongue in Mommy’s mouth. Ew. See, these are the things we have come to expect as parents. There is no dignity; our basic human rights are violated on a daily basis. If you were to observe these events outside the context of parenting, there may be cause for alarm; perhaps it might even be appropriate to panic and alert the authorities. Can you imagine, in a bizarre Quantum Leap sort of scenario, finding yourself in one of the following disturbing scenes?

Should you find yourself in one of these situations, stay calm. There is no need to dial 911. You’re just a parent.

I wasn’t prepared for all the little things when I had children. Living with a kid means living with toys and anything more complex than a rattle comes with little annoying pieces. After bringing the toys into the house, eventually (and in my house that really means immediately) the pieces scatter. These toy crumbs appear everywhere and stick around like dried snot on a kid’s face.

Lately, our ever-present toy crumb has been the tail with the stick. Tail with the stick (TWTS) is blue and it belongs to a fish. TWTS travels around our house mysteriously and lands in the most unlikely places. TWTS was in my bed. As I got comfortable one night, my foot touched something under the sheets. “OH SHIT!” I yelled, thinking I kicked a mouse or a bug. No, it was TWTS. I saw it in the silverware drawer. TWTS occasionally enhances my car’s Garbage Chic by hanging out on the floor. I feel like I’ve thrown TWTS away ten times already.

Soon I will make it a point to get rid of TWTS and push it to the bottom of the trash where it will not be found. Inevitably, that’s when someone will ask where the toy crumb went. “MOM! I need TWTS so I can get the squirt gun to work.”

It is only certain that a toy crumb has disappeared forever when it is requested and when we finally know its purpose.

Prior to becoming a mother, I thought I knew love, and realized that I had no idea what it truly was until I held my son for the first time. I wasn’t expecting how my heart would grow when I first heard him laugh, or found myself standing over him while he slept. I wasn’t expecting the intensity of my emotions.

Turns out, there are other things about parenting that were unexpected as well. Following are a few snippets from conversations recently had in my house. Ones that none of the parenting books prepared me for.

So, yeah. While osmosis and parenting books prepared me for the fact that I’d get peed on, pooped on, and catch vomit in my hands, not a single one warned me that my kid would accidentally break my nose, offer me his booger as a snack or want a shoulder ride while not wearing pants.

Ouchies and stickers. Two things I was not prepared for as a parent.

I mean boys and ouchies go together hand and hand, we all know that, right? I just wasn’t expecting so many of the ouchies to be mine. One Year Old expresses love through biting. 4 Year Old expresses frustration with kicks. Both throw things to express happiness, disdain, agreement, protest, uncertainty and every other emotion in the book. Enter my right eye.

I’ve decided to write this post when my right eye was on some sort of a karmic repentance journey absorbing extremely ouchy gestures of love and fury less than a week apart. They say love is blinding. They’re right. So are kicks. So my right eye was an evil dictator in a previous life. Does that it mean it doesn’t deserve help this time around? When I called the eye clinic to explain what had happened, the receptionist on the other side of the line tried to sound understanding, but I was making it very difficult for her: Your one-year-old GRABBED your eye?! Yes. Exactly. And then my four-year-old accidentally kicked it. Oh.

Ouchies and stickers go together (visit any pediatrician’s office to find out) but not if you’re mama. My stickers show up unexpectedly and they’re everywhere. Last week I was leaving home to attend this year’s first parent BBQ at 4 Year Old’s new school. I made an effort. I was wearing makeup, a dress shirt and a blazer. On my left hand there were two stickers: a blue car and another car saying “feel better”. I’ve noticed them. 3 hours later I’ve noticed them again. It was right before bedtime. Oh well.

I am one of those lucky women who didn’t really have morning sickness. A few brief weeks of queasiness in the first trimester, and then I was fine. I thought I had escaped the nauseating moments of motherhood. Sure, I had babysat as a teenager, and I even worked in a daycare center for several years, so I knew about diapers, and spit up, and boogers. But I also knew about hand sanitizer. Armed with Lysol and Purell, I was ready to take on the gross inconveniences that would necessarily accompany the sweetness of my baby.

However, I never expected these nauseating, revolting, and downright repulsive experiences:

Sometimes, there’s just not enough hand sanitizer in the world. I never expected that.

Rachel of The Tao of Poop

Confession: My baby was not the happiest baby on the block — despite reading Harvey Karp’s book, The Happiest Baby on The Block. With a name like that, who wouldn’t want to believe the hype? And, let me tell you, with a newborn crying for hours at a time, I was desperate for a prophet, even of the false kind. Enter Dr. Karp on his white horse (mixed metaphors appropriate for a new mom deliriously trying to stop her baby’s cries). His timing was impeccable. I opened that cardboard box from Amazon like I was unearthing the Holy Grail.

I embraced his 5S tenets like they were truths. I shushed, swaddled and swung Claire on her side, while she refused to suck a pacifier. The result: Lots of shushing and swinging coupled with endless hours of inconsolable crying. To add insult to injury: I personally vacillated between two different equally miserable states of mind:

1) Anger at the know-it-all Dr. Karp for preying on my desperation and duping me into spending $9.00 on his lousy book, which actually has the audacity to call itself “fool-proof.”

2) Anger at myself for being the only fool mother who was either a) duped by Dr. Karp, b) couldn’t figure out how to successfully implement these elementary techniques or c) the only idiot on the planet without the happiest baby on the block.

I realize that so many parents swear by this book (Jean). Personally, my time spent with Dr. Karp was similar to some of the dates that I had with bad boys in my twenties – full of promise with not a lot of follow-through.

Looking back, Dr. Karp wasn’t to blame for my reaction to his book. My expectations were. If I were writing a “What to Expect” book, it would have a super long title. One like: “Don’t have expectations about what your baby is going to need. Babies are generally alike, but they are also individuals, like us. Some of us like strawberries and squash, just like some babies like swaddling and shushing. Moms want to be prepared. We want to have answers and solutions, but sometimes there aren’t any. As cute as babies are, they often refuse to be tied up neatly with a bow (or to be swaddled).”

That would be the title and it would include two pieces of essential advice. 1) Trust your mom instincts and 2) Eventually, babies stop crying anyway.

There you go. Now, where’s my nine dollars? Oh, wait; I don’t have the title “Doctor” before my name. My mistake.

Sarah of The Sadder But Wiser Girl 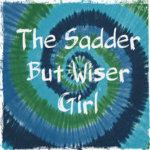 Nowhere in any of those books I read was a chapter entitled “It’s All Fun and Games Until Someone Loses Their Glasses”.

When my daughter was a toddler, she snatched them off my face, threw them on the floor, and broke them. Two pairs. Might I add two pairs broken in similar fashion in two different grocery stores. My son? On several occasions in grocery stores he smacked my glasses off my face accidentally. I don’t think I owned a pair of glasses that were intact until my daughter had reached the ripe old age of two and a half.

Nowhere was there anything preparing for the physicality of motherhood.

Of the whole glasses thing.

Or the whole fact that I was unable to walk or turn my head after having my second child.

Or that lying on the floor was in fact a hazard when my daughter used me as a hurdle and kicked me in the head half a hundred dozen times. You’d really think I’d learn after the whole hundred times.

Or the whole licking thing, which is something else entirely, because my older child has licked every surface in the state of Iowa.

Those books? I read them until my husband forbade me from reading them, because I took every little thing that happened seriously. I must admit I was prepared for breastfeeding and illnesses and stuff like that. But the glasses and the licking stuff? Not.So.Much.

Thanks so much for checking out our very first group post! We had a lot of fun coming up with these stories, and hope you had fun too! Go visit us on Facebook and share some of your crazy parenting stories, or even what you’ve heard through the grapevine, at the very least, say hi!

4 thoughts on “Extreme Parenting: What the Books Never Prepared Us For”